Here's another podcast from the good folks at Flotivity Media! This time I sat down with VBLN - Lewis Santana, 30 Spice // Simply Damon, Terick Lamont, and Malik Scott. These dudes, who are more like brothers, talked about all kinds of stuff. They've been making music for 6+ years and they talk about that history, their history together, and how they view their work in the hip hop scene. Featuring tracks: VBLN - Concentration Lewis Santana x Malik Scott - DMs Lewis Santana 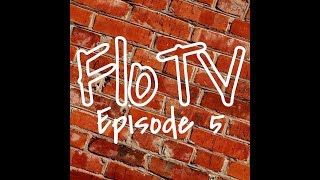 We had the dope opportunity to coolest of all the cool dudes, Lando Chill to discuss his Rap Van, his upcoming album, and Tucson Hip Hop. Shout out to the Mello Music Group artist for convo. Enjoy!

The #AZWayTooActive hash tag faced a lot of scrutiny on different fronts and then it's use slowed down considerably. I think what got lost in its use is the purpose for it. One of the main reasons it was created was to bring attention to Arizonas very active rap scene. Even today, knowing all the events, releases, and milestones happening is difficult. Being able to click on a hashtag and immediately find all those events bring attention AZ's rap scene still sorely needs. Bas

Malik Scott - Clean Slate The acceptance of mistakes is a theme I fuck with. At the end of the day, mistakes attributed to anyone else signifies a failure to learn from those missteps, mishaps, miscalculations, and misunderstandings. You want a theme song to help you focus on this. Well here you go. Malik Scott is spitting straight knowledge in the form of self-help bars. That brand new day chorus is a mantra to wake up to for real. Cam - Voices The aptly titled Voices presen

I first met Sheldon Banks aka Shelby's Dad aka @takeyophoto aka DJ Hot Boy at a show he was deejaying. I've always been intrigued by his "I don't give a fuck, I want some shine" attitude. I planned on giving it to him but things never worked out. Then one day his IG got popping. With the #35mmfilm and #filmisnotdead tags attached to his photos, he began dropping dope flicks on the daily. Whether the pictures featured local rappers, beautiful women, or street scenes, it was ob

Dali's 2017 release Apathy is fantastic. It is a journey through the grieving period of a teenage girl. The tone of the album perfectly meshes with the lyrical content of someone who was heartbroken and then over it. Dali hung out with us one day to talk about the inspiration behind album - no his name was not Frank (she would not be this heartbroken over a guy named Frank she said). Featuring tracks: Range Rover Frank Orange Soda Dreamstate (2:56AM) Search for Dali on all

Poets and Lovers Entertainment has been popping up all over the place. One of the dudes behind the collective is Julius King. An artist in his own right, he raps and sings, Julius King is out making all kinds of moves whether making new music or producing content for PALE. He stopped by to talk about his 2016 release Planet Guu, some new music he's working on, and all the work he does with PALE. Stick around to hear his story about pissing off the sound and light man his firs

Wavegod is kind of an enigma. Evinci even more so. Together they produce content in all areas whether that's music, graphic design, or video. Wavegod alone has a bunch of tracks on Soundcloud, has produced a bunch of videos in AZ, CA, and WA, and he has concert recap videos and photos of Pouya, XXXTencion, and others. On the FloCast we talked about the origin of his name, his videography, the music he's been working on. Evinci, who is in a mysterious group, called Cntrl Alt

Can We All Agree Phoenix Now Has a Hip Hop Scene?